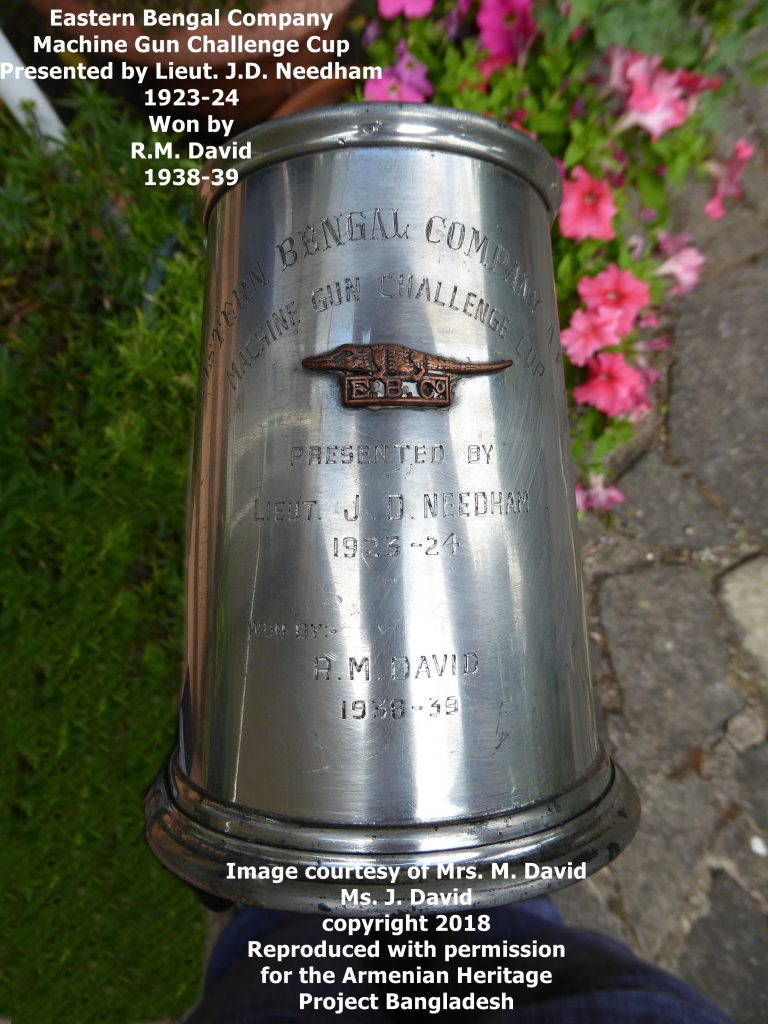 Ruben David arrived in Dhaka at the age of 17 from Julfa. He was a nephew of the Armenian priest Ter Nerses David and lived with him and his family at the Armenian Church. A few years later, Ter Nerses’s brother Ter Bagrat and his family  took over as Priest at the church and Ruben continued to live with them at the Parsonage. During the outbreak of WW2 Ruben joined the Eastern Bengal Company, a voluntary home guard unit in Dacca.

The uniform was modified in 1940 and included khaki formal dress with yellow facings. The military badge included the image of a crocodile and the motto “Vis Et Tenax”. 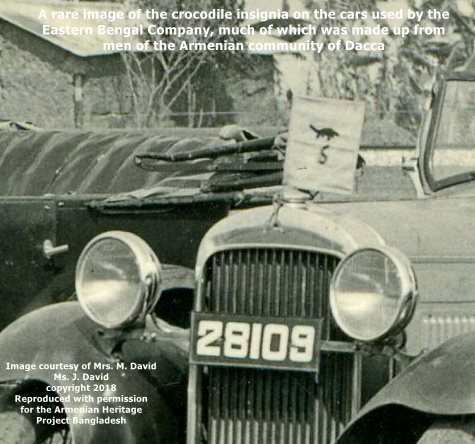 A full list of names of those who served in the Eastern Bengal Rifles in Dacca can be found here.

Carapiet Chater Apcar (C.C. Apcar above) not only was in the Volunteers at Dacca during WW1, he continued as a volunteer in Dacca after the war and into WW2.

Two military awards are featured in British Army, Indian Volunteer Force medal awards 1915-1939, the Volunteer Forces Long Service Medal & Good Conduct Medal and the Efficiency Medal. The records show over 15,000 individuals from the Indian Defence Force (IDF) or the Auxiliary Force India (AFI) who were awarded the medals between 1915 and 1939. The IDF and AFI were India’s equivalent to the UK’s Territorial Army, which was comprised of part-time regiments of European soldiers who could be fully mobilised in wartime. Prior to 1920, the IDF and AFI were known as the Indian Volunteer Force (1857-1917). During the First World War, most of the Indian Volunteer units were stationed in India on internal security assignments. They became a part of the umbrella organisation Indian Defence Force (IDF) in 1917. The IDF was disbanded after the war but voluntary service continued through the Auxiliary Force from 1920 onward.

Carapiet Chater Apcar was promoted to the rank of Sergeant with the Eastern Bengal Company A.F.I. and on the 29 April 1930 he was awarded the Volunteer Long Service and Good Conduct medals.

These exceptionally rare images of the Eastern Bengal Company Headquarters in Dacca between 1937 and 1942 are from the albums of C.C. Apcar’s family in London. Carapiet Apcar was a very keen photographer and can be credited with recording numerous events and occasions in and around Dacca. He took the majority of these images during the war at the camp headquarters and these have never been seen in public before now. It was always thought that no images existed of these volunteers. 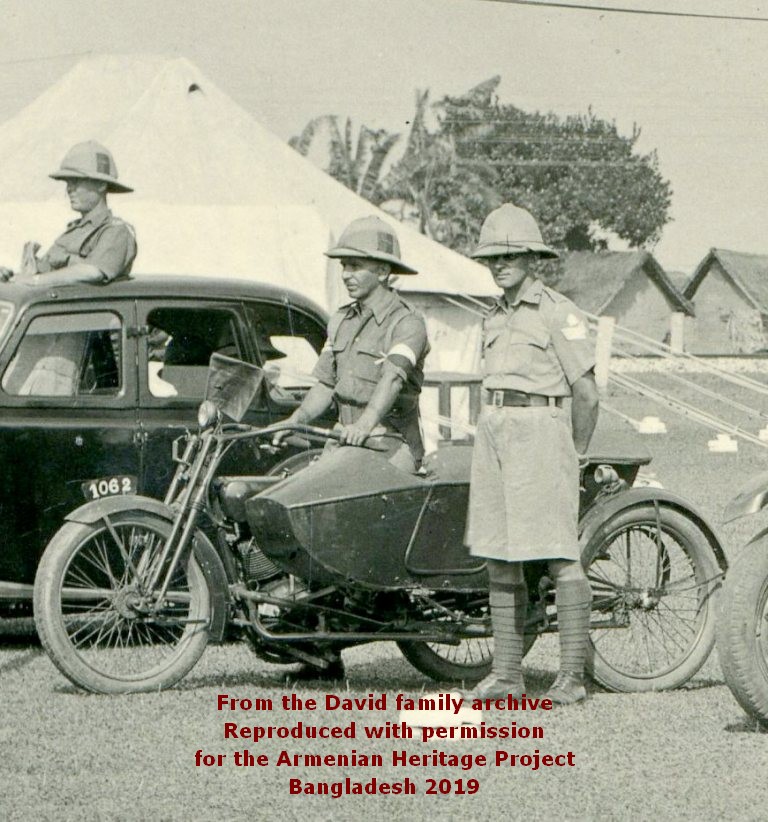 A rare image of Carapiet Chater Apcar in the Eastern Bengal Company with his favourite motorcycle and side-car. 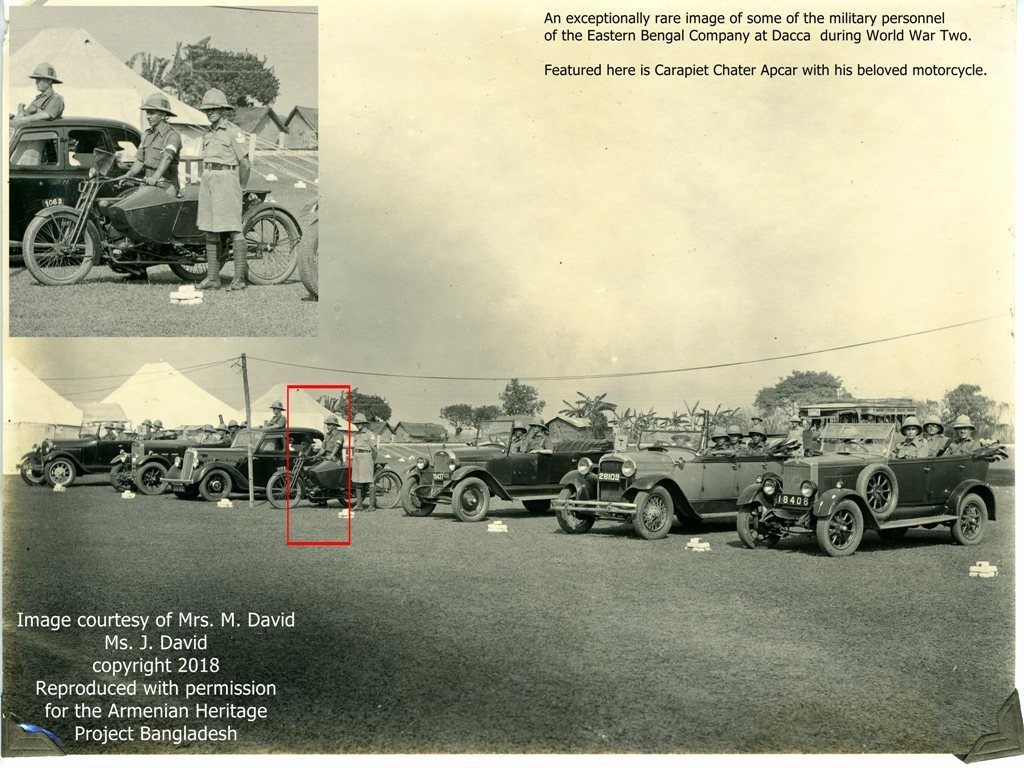 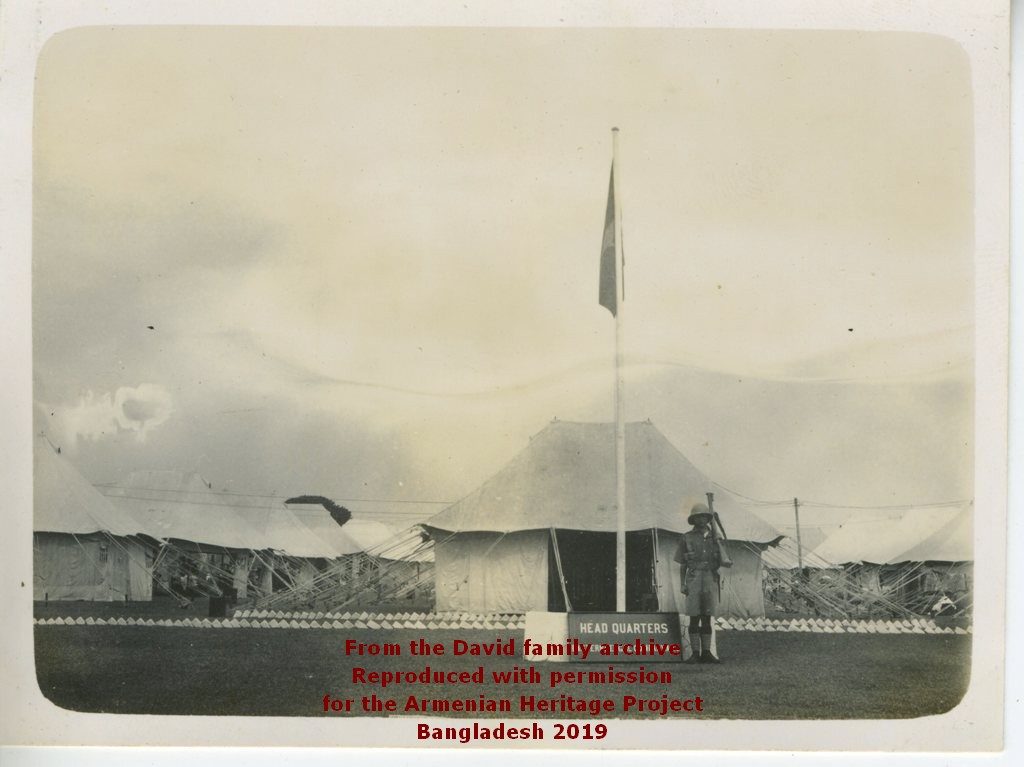 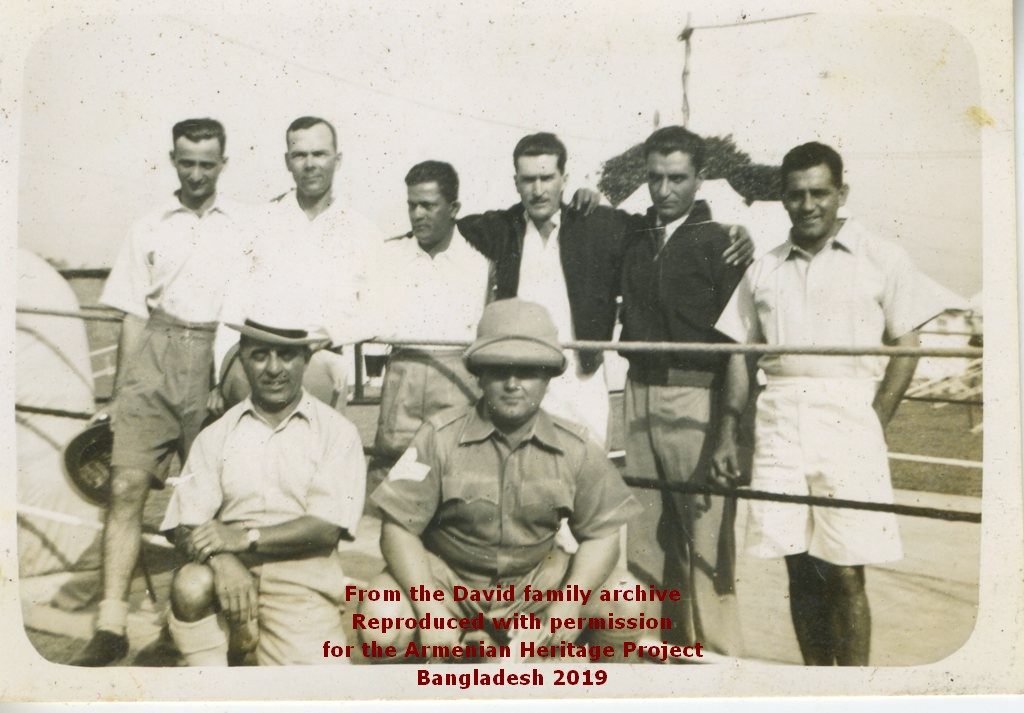 Ruben David and others from the Eastern Bengal Company, Dacca. 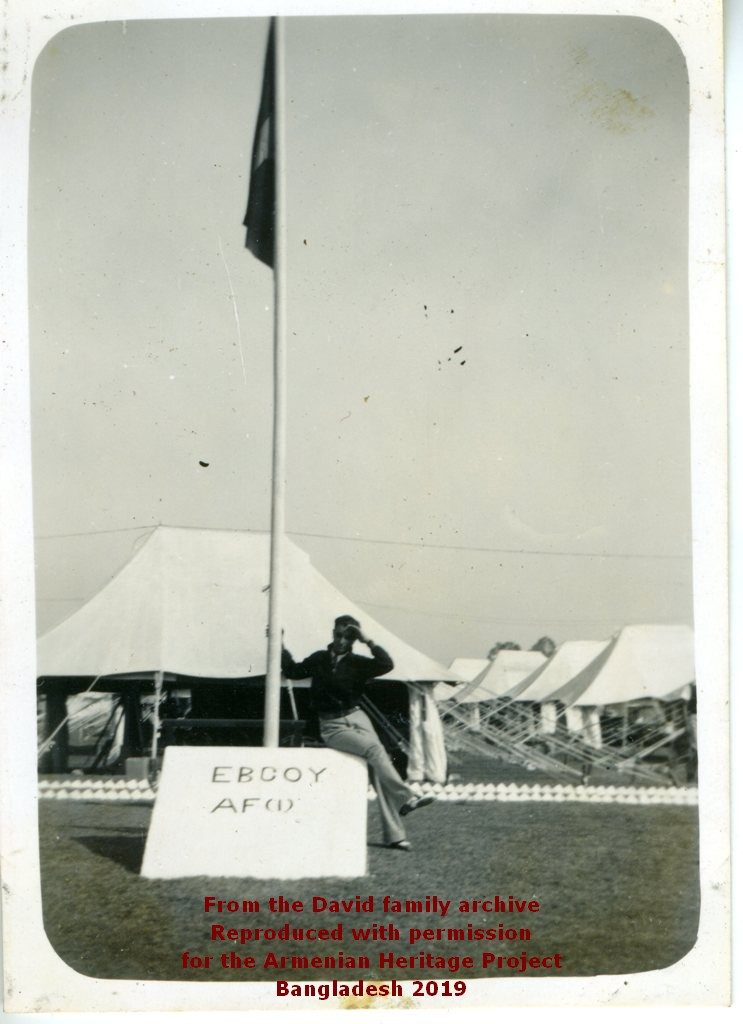 Ruben David by the Eastern Bengal Company sign and flag 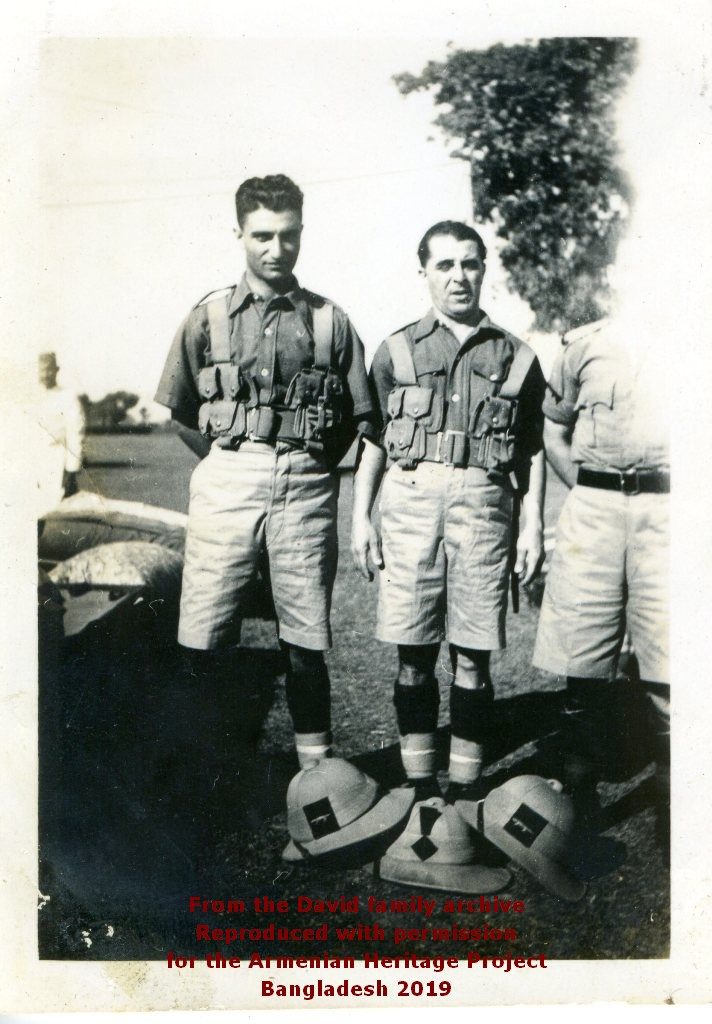 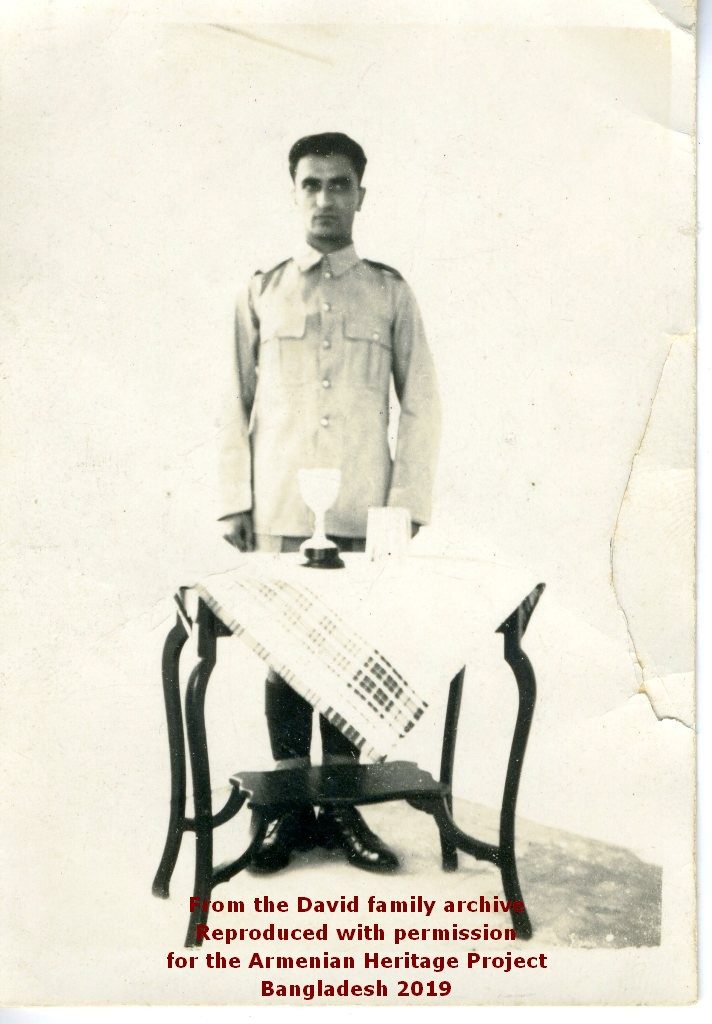 Eastern Bengal Coy. Ruben David with some of his trophies 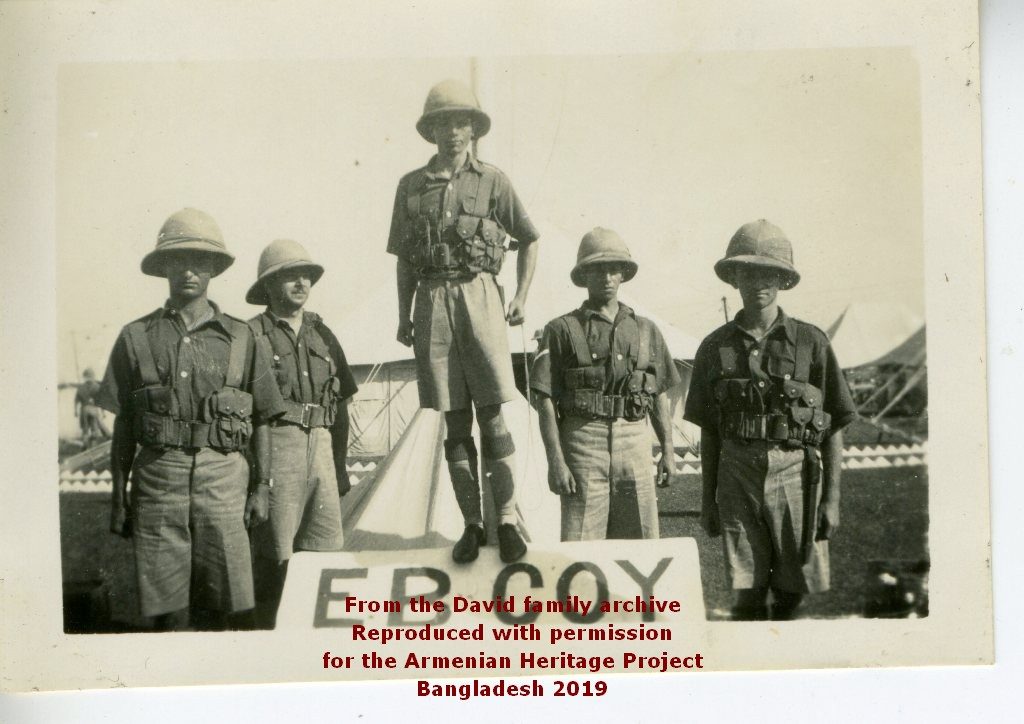 Ruben David and others from his regiment at the Eastern Bengal Company Headquarters in Dacca. 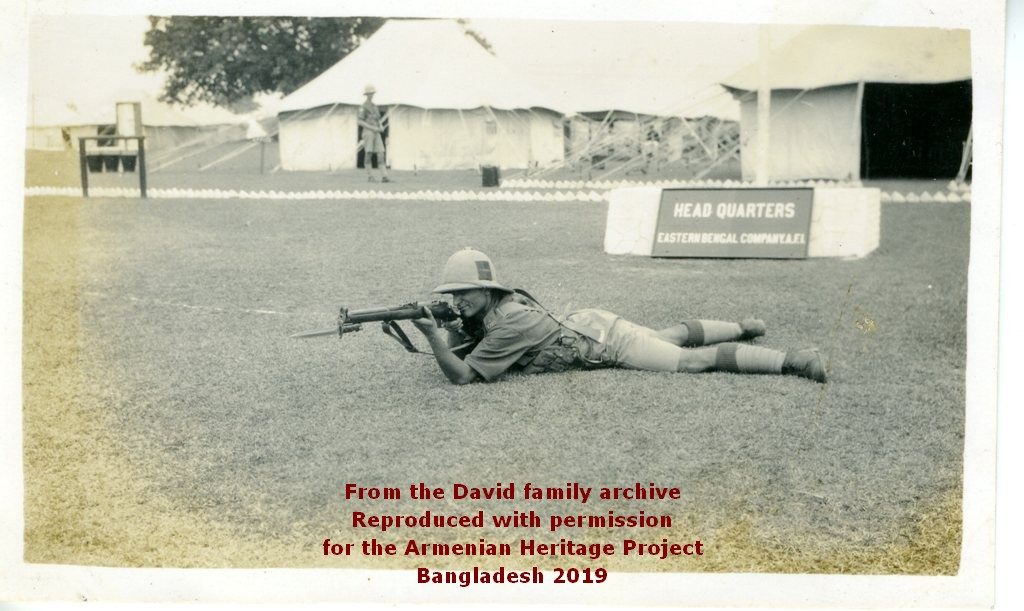 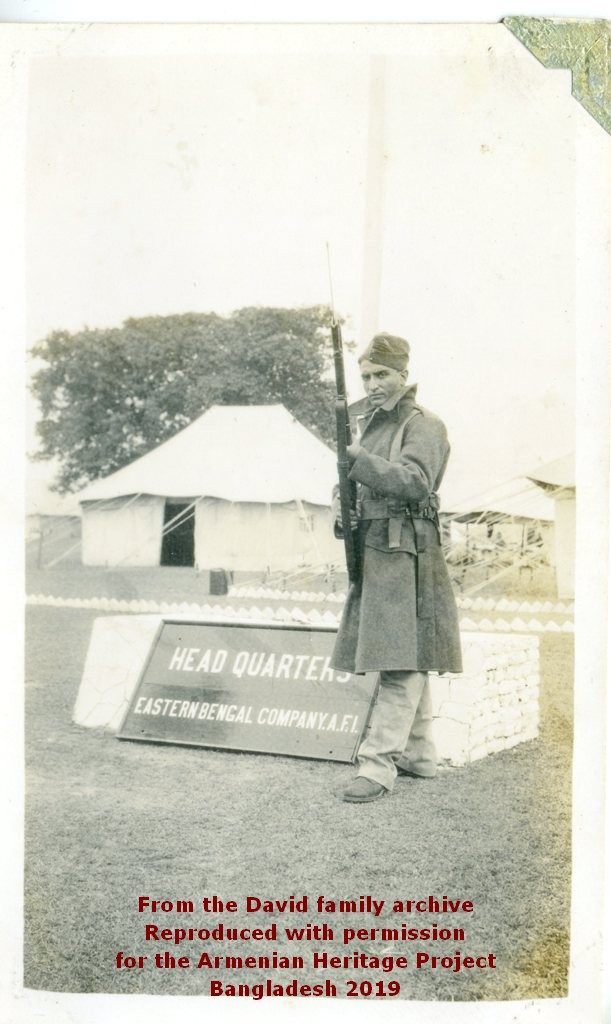 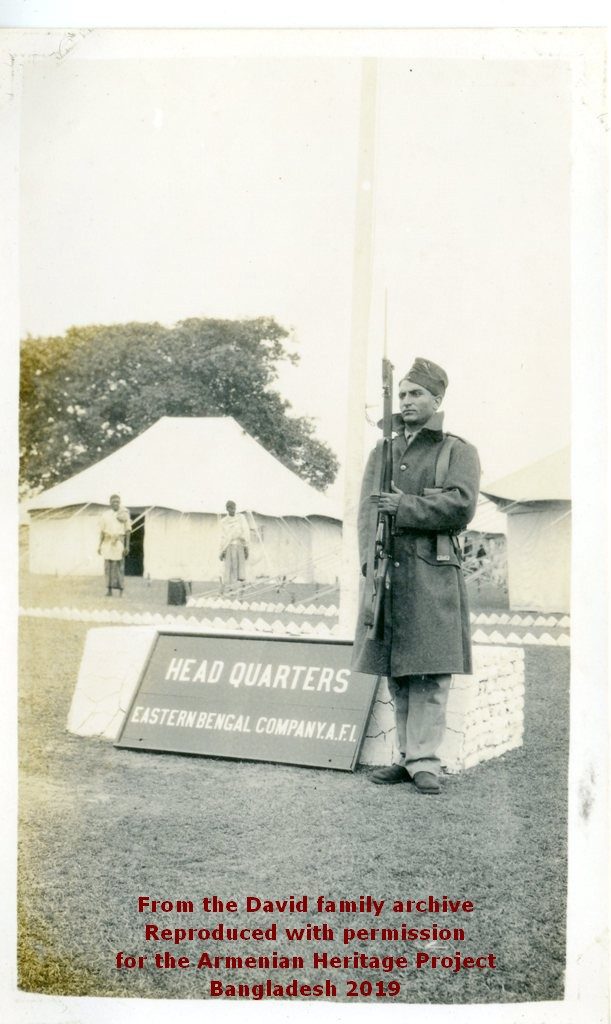 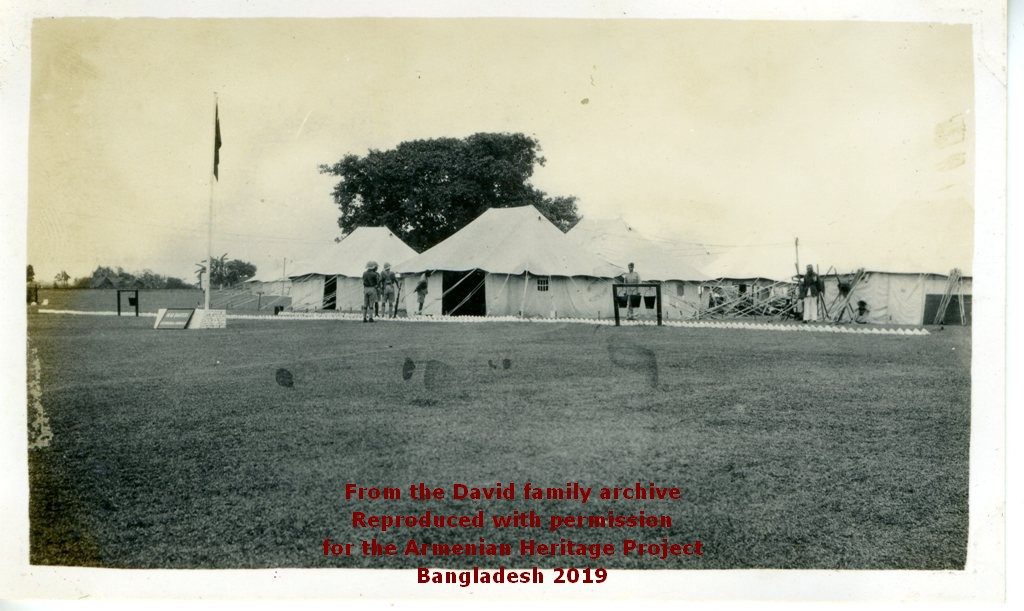 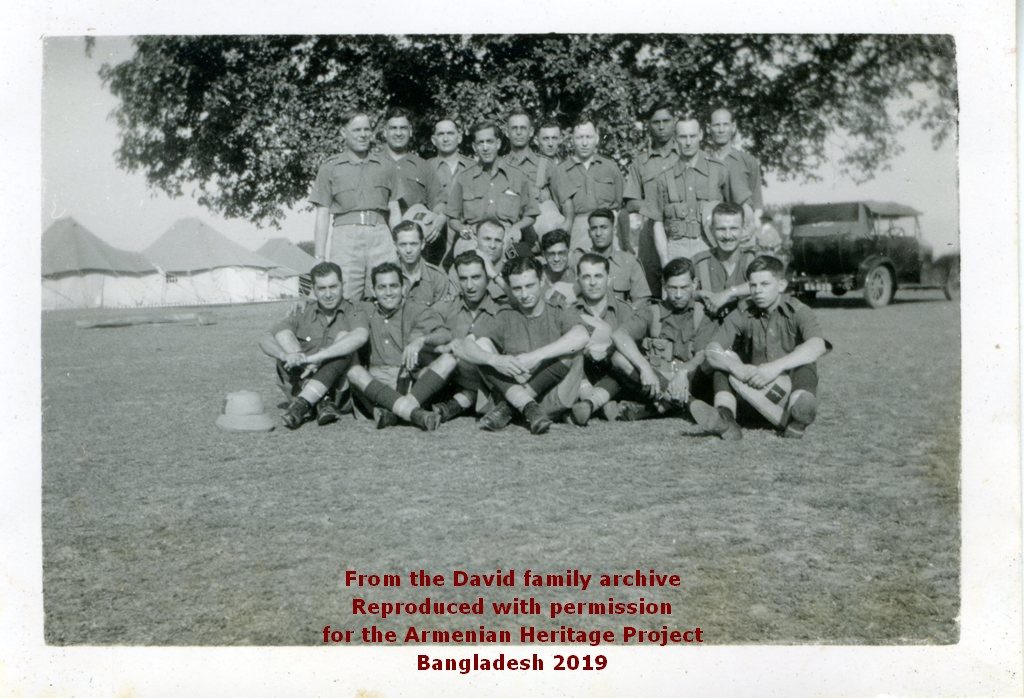 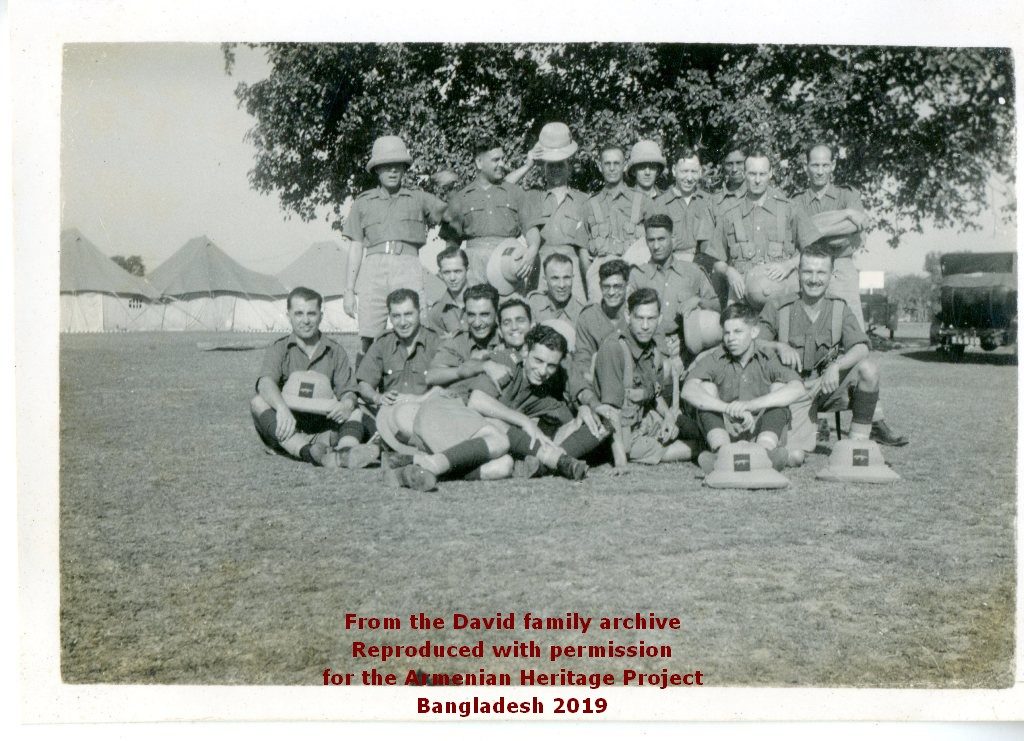 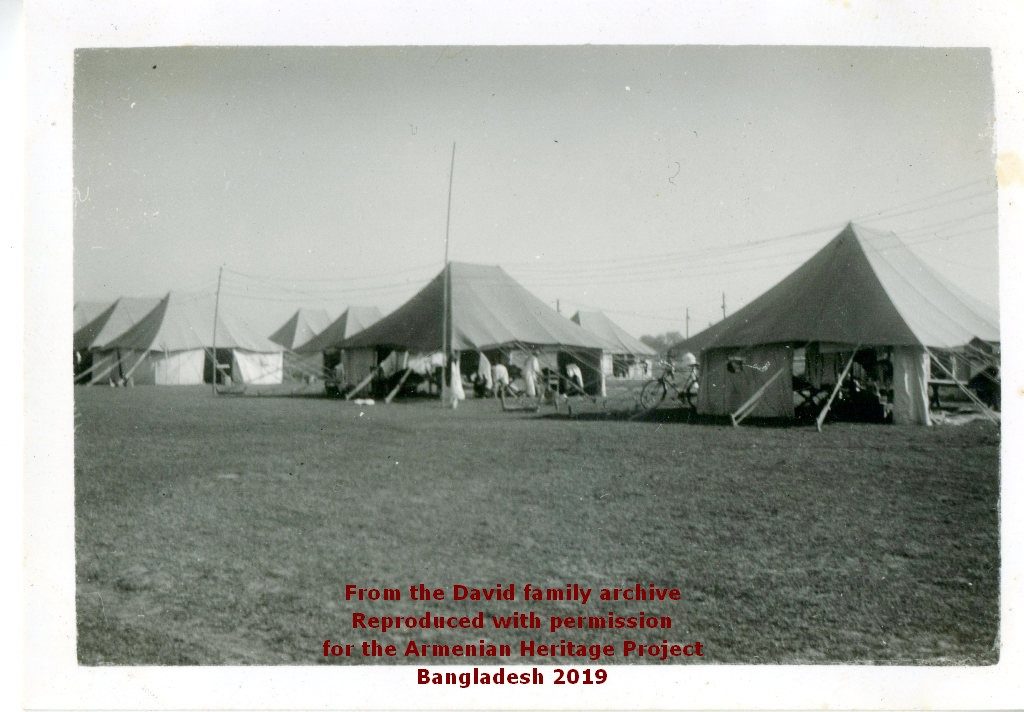 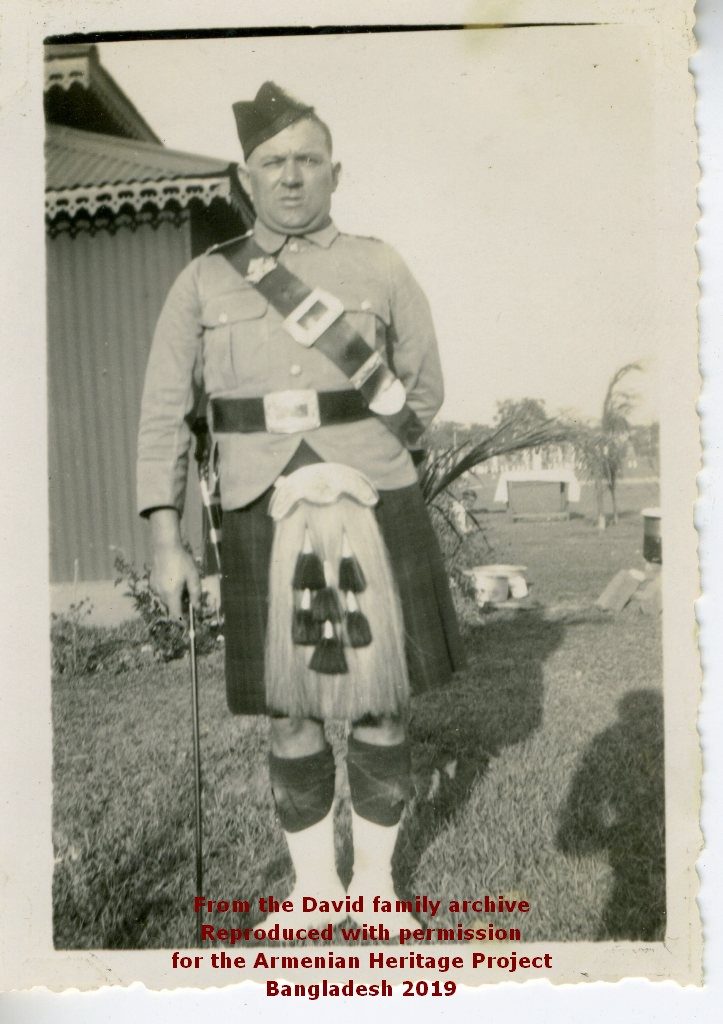 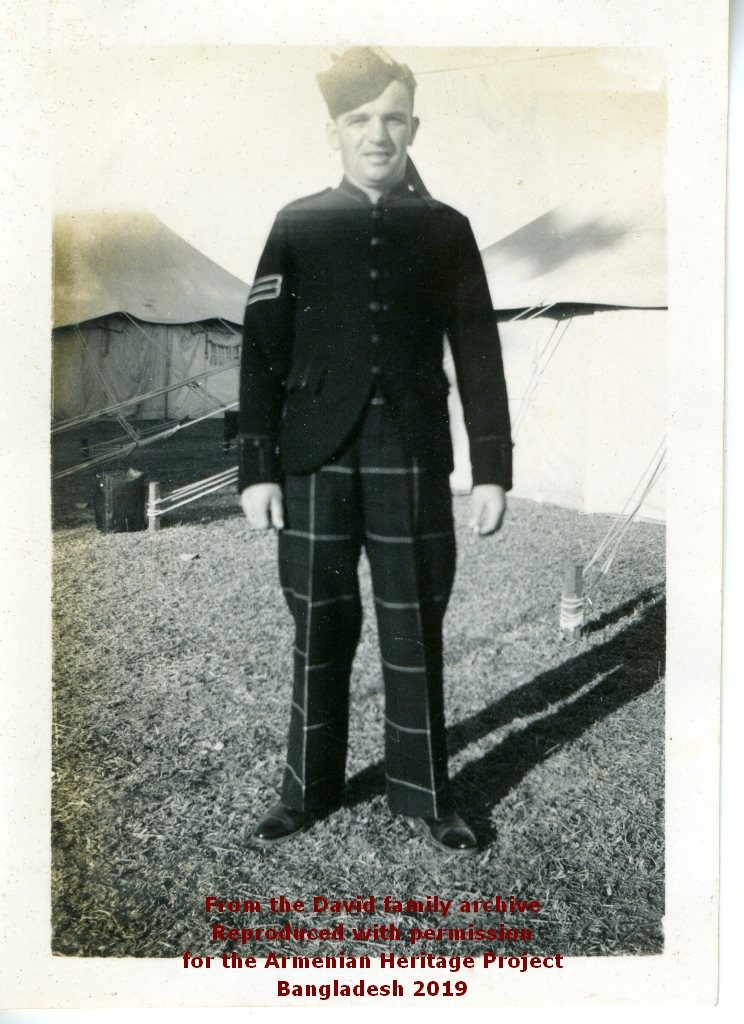 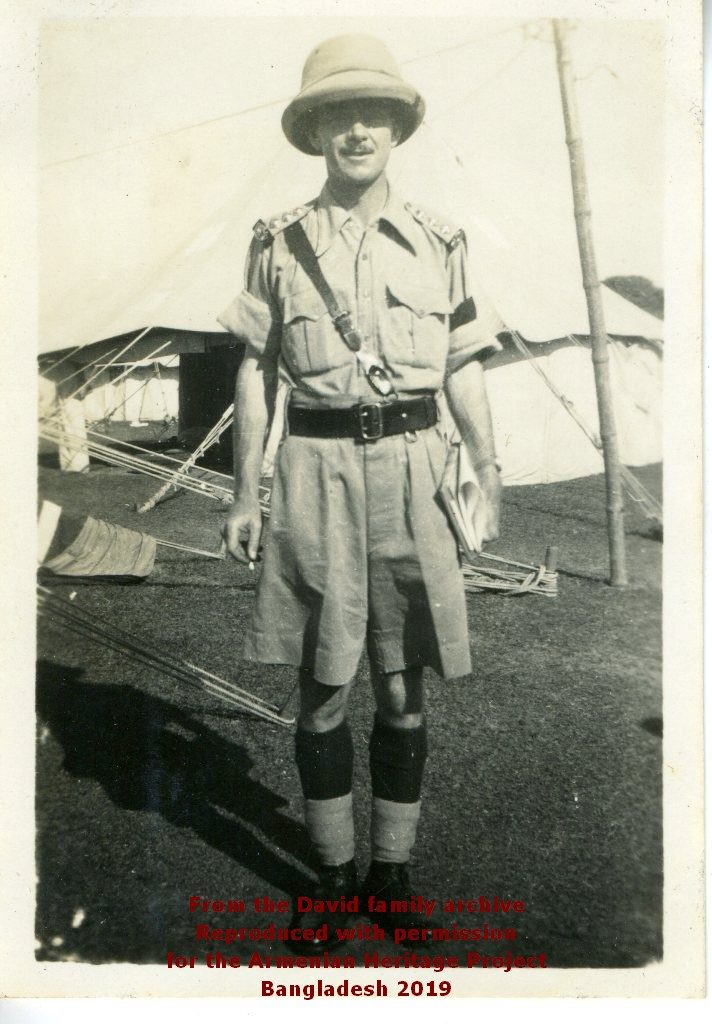 Possibly Captain of the EB Company 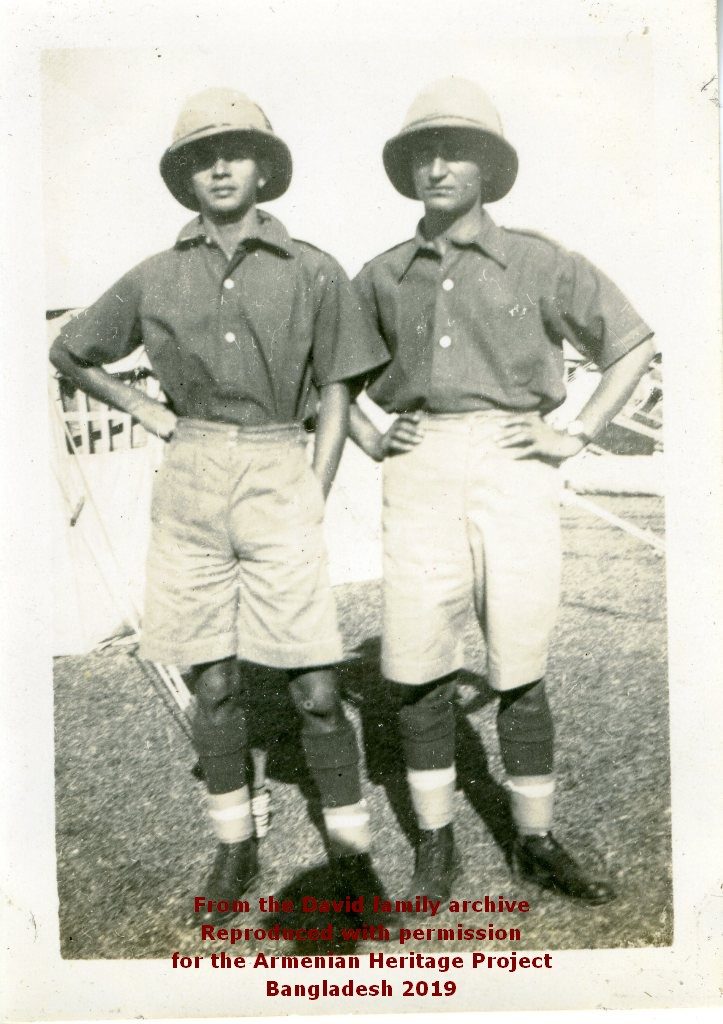 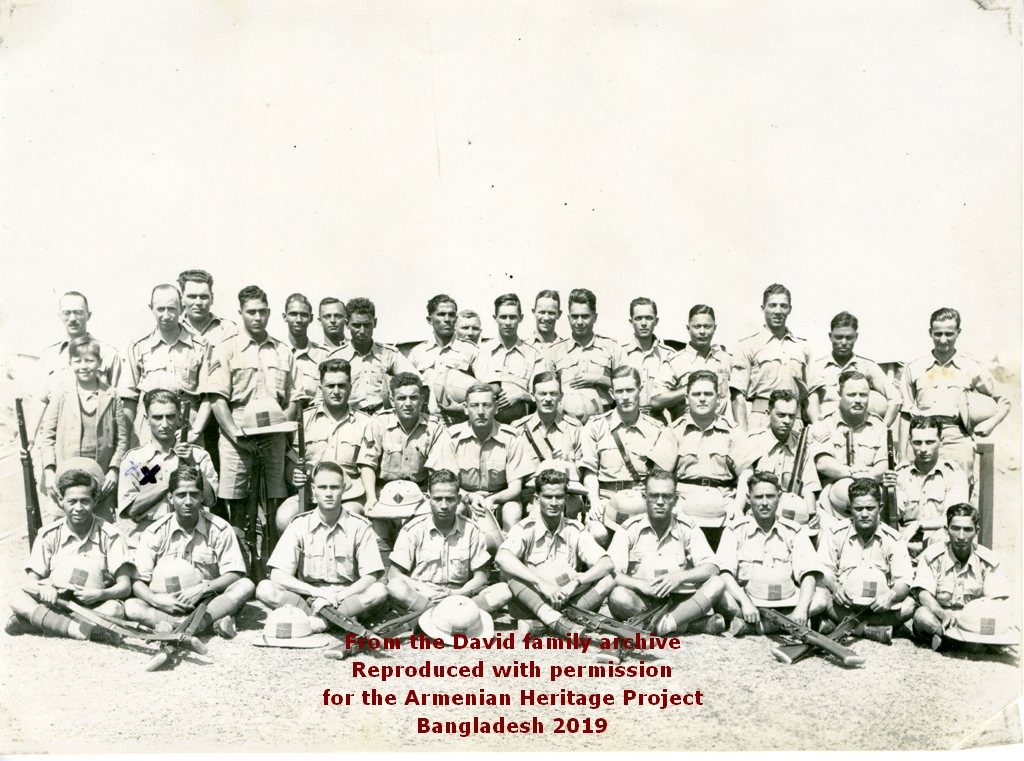 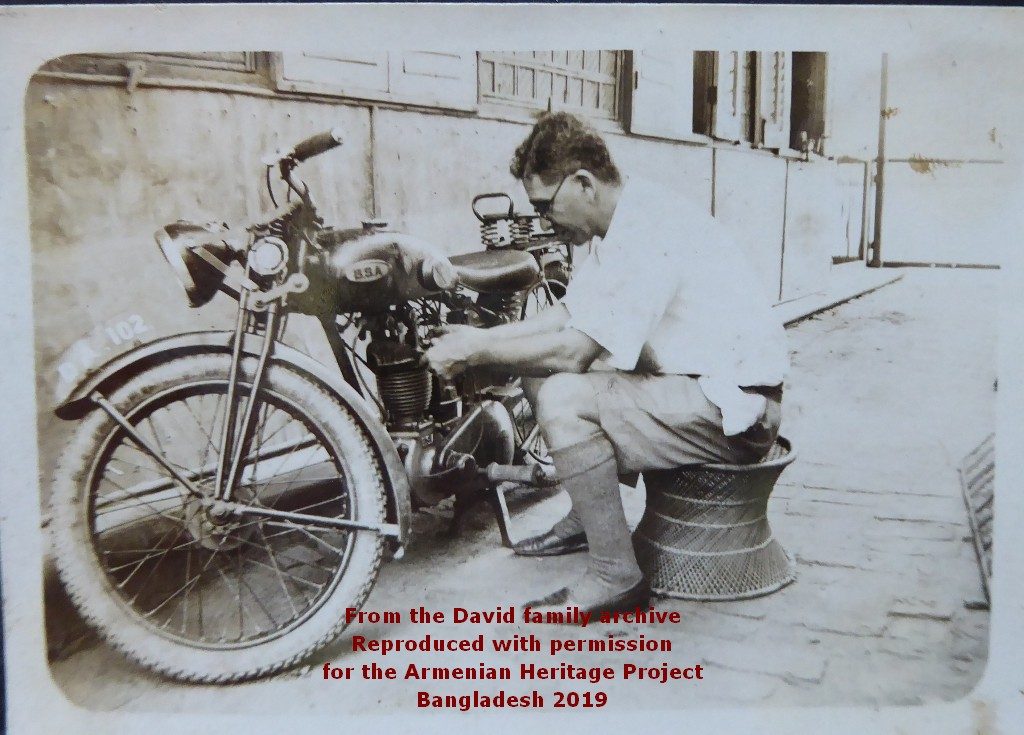 Rarely in front of the lens, Carapiet Chater Apcar captured with his own camera as he fixes his motorcycle