The Pogose School in Dhaka is a familiar landmark in the city. What is perhaps unfamiliar to the Armenian Diaspora around the world is that it was opened in 1848 by local Armenian Joakim Gregory Nicholas Pogose.

His Armenian family network extended into Calcutta as well as Dacca. His parents were Gregory Nicholas Pogose and Elizabeth née Sarkies. Through his mother’s family line one can see a deep rooted philanthropic trace, His great grandfather, Sarkies Ter Johannes, was co-founder of Johannes Sarkies & Co., and during Ter Johannes’s lifetime contributed enormously to the poor, destitute and needy. His grave inscription reflects: “… he was charitable to the homeless and distributed money bountifully.” 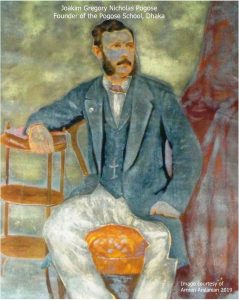 Joakim Pogose married a second cousin, Mariam née  Avdall. The influence of personal advancement through education was something she was already very familiar with. The significance of her well-regarded father, Johannes Avdall, the headmaster of the Armenian College & Philanthropic Academy in Calcutta from 1825 for 45 years, would have only made Joakim even more determined to create a school in Dacca. 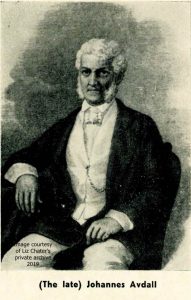 What better mentor than his own father-in-law, a leading educationalist of his time? Imagine if you will, the conversations these two would have had, no doubt discussions on education and the complexities of setting up a school, and how Joakim could learn from the first 25 years of the Armenian College’s existence. Poignantly, In Johannes Avdall’s will, he left a small legacy to: “….my esteemed son-in-law Joakim G.N. Pogose…..”.  Avdall was the perfect motivator for the forwarding thinking Joakim, emulating his father-in-law, Joakim became the headmaster of his own establishment. Knowing his extended Armenian family were already making a significant difference through education in one part of India, he realised it was within his gift to create a similar institution in Dacca, this was simply inspiring for Joakim. The determination and drive by Armenians in India to learn, develop and progress is something the early settlers recognized to be very important. Joakim was no different, and was in the fortunate position to be able to financially support his dream.

In 1856 Joakim and his cousin Nicholas Peter Pogose were on the local and managing committees of Government Colleges and School for Dacca.[1]

In April 1859 Joakim, along with his wife Mary and their 4 sons travelled from Dacca, via Calcutta to England. Also making this journey were other Armenians from Calcutta; Master Malchus, Mr. and Mrs and Master Paul and their three children (and two servants); and Master Apcar. It may be that the Pogose’s were acting as guardians on the voyage for Master Apcar[2]. The vessel docked in Southampton and the Pogoses continued their journey to London. The 1861 census shows the family at 26 Queen’s Terrace, Paddington, in temporary boarding house accommodation.  Education for his own children was paramount in Joakim’s mind and although by 1862 he and Mary were by now back in India, their second son, John Avdall Pogose was successful in gaining prizes in English, Maths and Classics at Kings College School in London[3][4], an institution run in conjunction with St. Marylebone and All Souls’ Grammar School, a most prestigious institution. The Pogose name regularly featured in the prize list for the school for several years after this. Meanwhile John Avdall Pogose’s brother Nicholas Joakim Pogose was elected to the ‘Eton Club’ in October 1869[5], indicating this is where he continued his education until he went to Oxford.

Meanwhile in Dacca, J.G.N. Pogose was amongst many things, an active Freemason. In recognition of his dedication to the craft, he was presented with as solid gold Past Master’s jewel. Reported in the Indian Freemason’s Friend as follows: “Lodge Good Hope – The brethren met emergently on Wednesday the 9th September [1863]……the proceedings were rendered most gratifying by the ceremony which next took place, of presenting to Bro. J.G.N. Pogose, P.M. of the lodge, in a suitable and graceful speech from the E., – besides a splendid collar and apron – a very handsome solid gold P.M.’s jewel, most tastefully executed with buckle and holder, ribbon and case complete, having on a blue ground, a square, and the diagram of the 47th proposition, encircled with a neatly corded vine and cassia border, and surmount with a square and compasses supporting a double Triangle, richly embossed and chased, bearing on the inverse the following inscription:

“Presented by the Brethren of Lodge Good Hope (No. 1058), Dacca, to W.Bro. J.G.N. Pogose, as a token of fraternal regard, and in acknowledgement of his valuable services to the lodge, particularly whilst W.M. in 1861.”

And around the obverse: “Lodge Good Hope (No. 1058).” The gift was acknowledged by Bro. Pogose in the most thankful and appropriate terms, and with feelings of the warmest gratitude.”

By December 1873 J.G.N. Pogose had been appointed to the Mitford Hospital Committee[8] in Dacca, along with fellow Armenian Marcar David who ran a successful jute business in the city. These two community driven individuals can often be seen trying to make a positive difference by contributing and helping the local Dacca population. 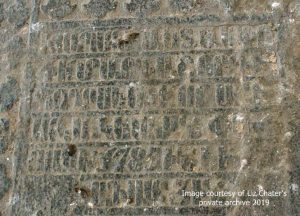 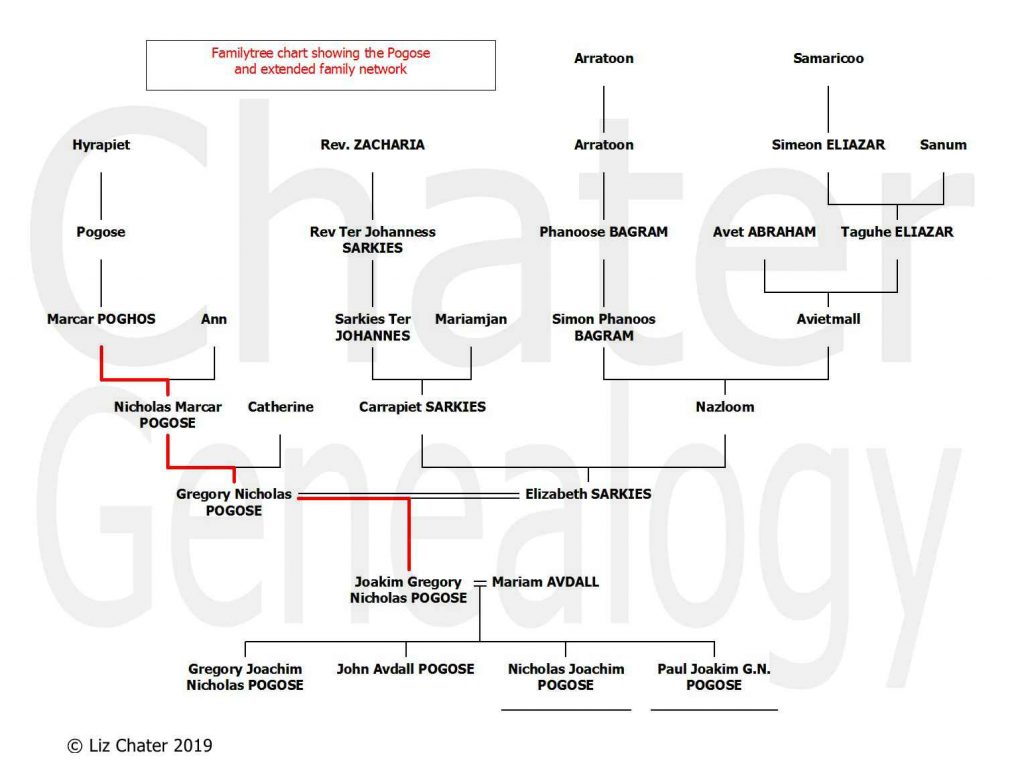 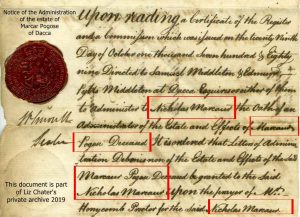 However, it wasn’t just his own school that interested him. He actively supported a visiting women’s rights campaigner from England who was focused on education for women and reform. Mary Carpenter dedicated her life to promoting female education and better standards of living around the world. 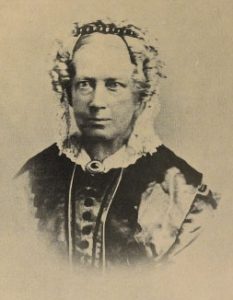 Having already travelled to India a number of times, she returned once more in 1875, landing in Dacca where her hosts, Joakim and his wife Mary made her most welcome[9] [10]. During her time in Dacca, and fully supported by the Pogose’s, Mary Carpenter gave numerous talks about female education, infant training systems, reformatories, sanitation, industrial schools and providing better homes for the poor. She visited local jails to encourage better conditions for prisoners. She suggested merging the local branch of the National Indian Association (originally established by her) with the local Philanthropic Society, thus giving further strength to the purpose of female education. In her speech at the farewell reception held by Joakim and Mary Pogose, she said: “…sanitation is a subject which you will do well to take up; do not oppose Government in its efforts in this city to make sanitary improvements; you stand in very great need of them; you will improve in physique if you live more healthily…..”

On the evening of Tuesday 28th December 1875 her Pogose hosts bade her farewell. They were joined at the reception at the Pogose’s well appointed home by a number of local native gentlemen, and Mary Pogose was just one of three local females to attend the occasion. Clearly, gender equality was still a distant dream for such gatherings.  In thanking everyone, and particularly Mary Pogose, Miss Carpenter said: “…it seems but yesterday that Mrs. Pogose led me into my chamber, nicely decorated with evergreens and fitted up for my comfort.  I am very happy that I came to see you.” Eighteen months later Mary Carpenter passed away at her home in Bristol, England, but her legacy continued long after her demise.

In 1876 Joakim and his cousin Nicholas Peter Pogose were honorary magistrates in Dacca together.[11] 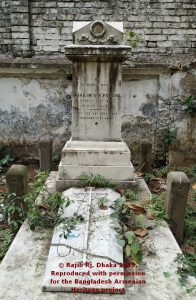 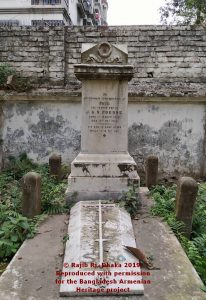 Joakim died on 3rd December 1876 just two months after his fourth son Paul who had passed away In October of that year at just 22 years of age. By the end of this tumultuous year Mary Pogose had buried a son and a husband. She meticulously and carefully created identical tombstones for them; they are placed only yards apart in the Narinda Cemetery, Dhaka. Tragically, Mary and Joakim had already buried their 3rd son, Nicholas in 1872 who had died in St. Leonard’s, in Sussex of typhoid. Initially Nicholas had been buried in Kensal Green cemetery in London, but, was re-interred at St. Sepulchres, Cemetery, Oxford close to where he had studied. 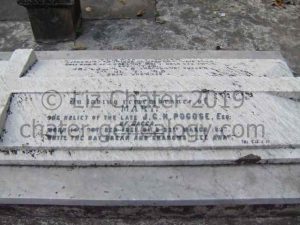 Mary’s life continued to be difficult, her remaining two sons, Gregory and John became “mentally incapacitated”. Both initially seemed to have promising careers in front of them, but by 1893 she was providing care and supporting them both financially. Concerned about their financial future after she died, Mary ensured there was sufficient money and physical support for both of them in her will. Mary died in Calcutta in March 1893 and is buried in the Holy Nazareth Armenian Church in the city. 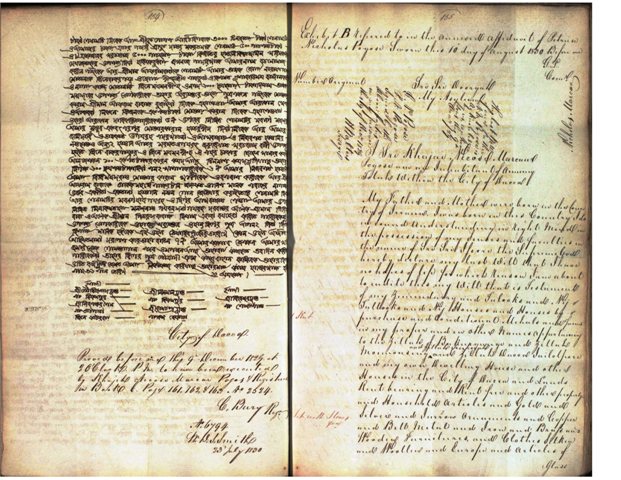 Extract from the will of Nicholas Marcar Pogose showing the first and last pages in English and Bengali. BL: L/AG/34/29.47/153 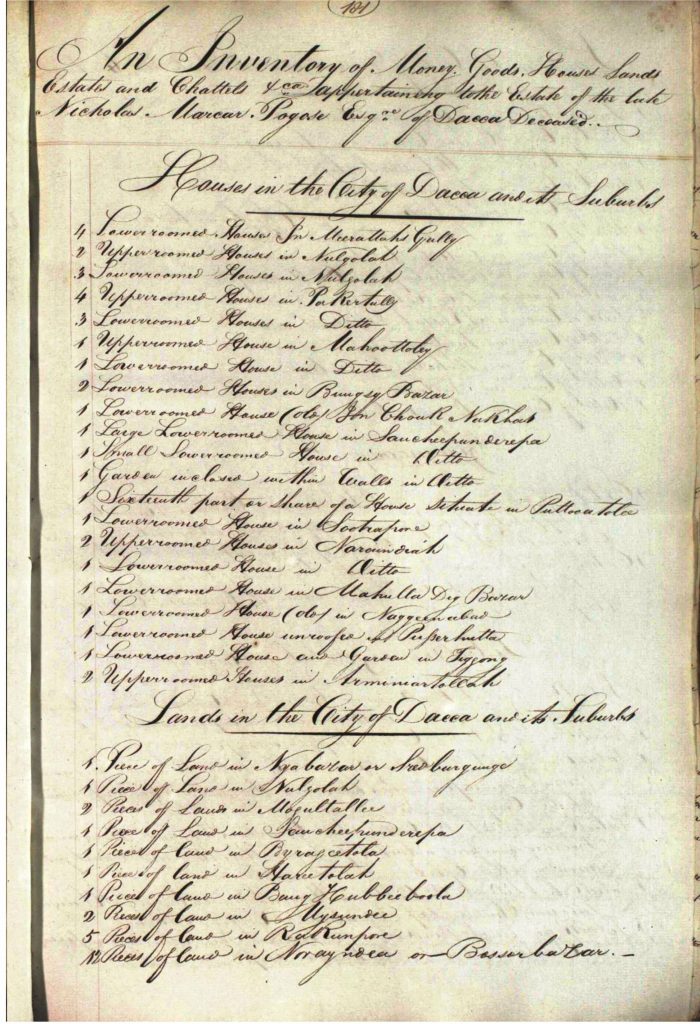 Page 1 of the inventory and accounts of the estate of Nicholas Marcar Pogose lists a small section of the houses and lands he owned at the time of his death. BL: L/AG/34/27/96/181

Today, there are no living descendants of the Pogose School founder JGN Pogose and his wife Mary. The school continues to educate students in Dhaka. Pogose’s father-in-law’s school in Kolkata, The Armenian College & Philanthropic Academy also continues to thrive. It will be celebrating its 200 year anniversary in 2020.

A less successful cousin, Nicholas Peter Pogose, was briefly the proprietor of the Dhaka Daily News, as well as a Warden of the Armenian Church Dhaka, but during his lifetime was declared hopelessly insolvent. Nicholas’s son Peter Nicholas Pogose and his wife Eugenie nee Manook seem to spend the majority of their lives playing catch-up and trying to avoid their creditors. Peter was embroiled in a spectacular court case for fraud, eventually being found guilty. You can read the full story as part of the Bangladesh Armenian Heritage Project stories here.

[6] There is a separate section for Nicholas Peter Pogose and his family, below

[10] Mary Carpenter arrived in Dacca in the second week of December. It was noted in ‘The Indian Mirror’ of 28th November 1875 that she would be the guest of Mr. J. Pogose.